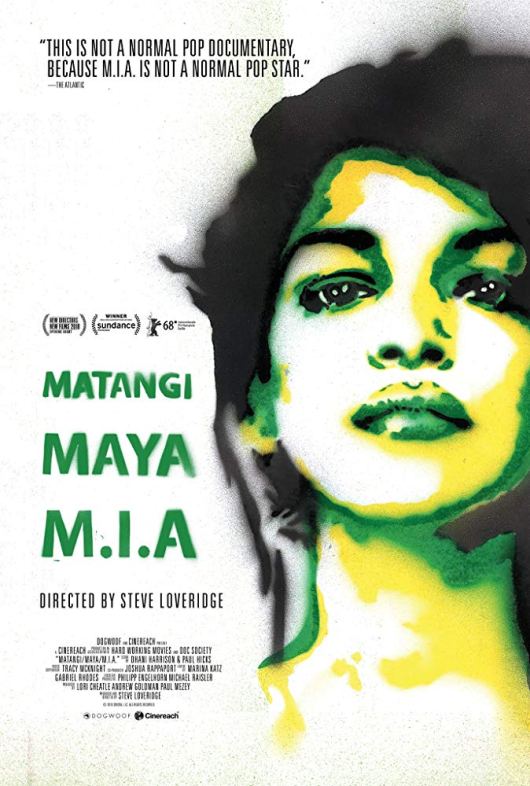 Steve Loveridge’s stunning and evocative documentary of his long time friend Mathangi “Maya” Arulpragasam (aka rapper M.I.A) begins with a question that he poses to the British-Sri Lankan Tamil star. Why isn’t she like a normal popstar? Why don’t I shut the fuck up you mean, she replies with a cutting smile.

M.I.A is not your regular star. A first-generation immigrant, refugee, whose father founded one of the early Tamil resistance movement – later known as the Tamil Tigers – her background influences and impacts every piece of her work, and every piece of this documentary.

With hundreds of hours of home video, shot by Maya herself from a young age, the documentary follows her career trajectory, from early music videos and self-made album art, to performing at the Grammy’s and the infamous Superbowl, allowing Maya to present her story. Matangi / Maya / M.I.A explores the Sri Lankan civil war, the genocide of the Tamil people by government forces and the impact it has had on not only Maya, but also the rest of her family.

Early on in the film, in 2001, Maya returns to Sri Lanka to visit family and gain a better understanding of the country and conflict in which she is so passionate about. Here she hears stories of violence and sexual assault, night checks by the army and is herself sexually assaulted by soldiers on a bus – something which she carefully and emotionally discloses later in the film. This sets the groundwork and understanding of her activism, her refusal to be quiet about the injustices in the world.

One telling and interesting aspect of the documentary is not just Maya herself, but also the narrative that is created about her by the media, particularly in the US. During a painful interview with Bill Mayer in 2009, the host repeated jokes about her accent, asking if all Tamil people sound like Mick Jagger, while Maya tries to get across the atrocities that are currently happening in Sri Lanka. Three years later, after the Superbowl middle finger, she asks angrily why that was more shocking to the American media and public than state sponsored genocide.

We see her grown from a confident young woman, to a vibrant, creative and unafraid star who will not be pigeonholed into a clean-cut, easy to digest pop star.

M.I.A has a voice. She’s not afraid to use it. To be heard. To be understood. To be respected.

Search the film out. It deserves to be seen. And on the way home blast M.I.A’s back catalogue so loud the speakers shake.

Also, I’m a white girl, I can’t speak to the experiences of being a minority, or persecuted or racially abused. And it’s important that people from different groups and backgrounds see and get to talk about this film. Here’s a review from Tamil film critic Lorenzo Fiorito on the documentary. It’s better than anything I could ever articulate.