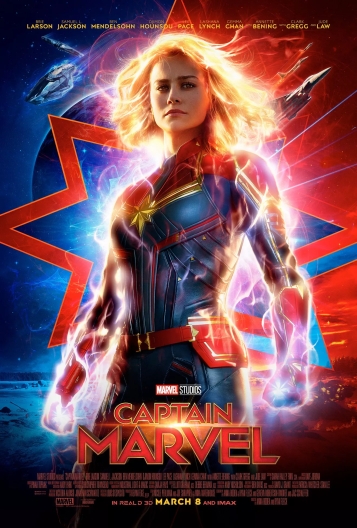 In 2019, it feels extremely perfunctory to put much celebration into the fact that we finally have Marvel’s first female led film. Eleven years after Iron Man was first released, we finally have more of a gender balance in the actors in the juggernaut that is the MCU – and much of that is due to the cracking supporting cast in last year’s Black Panther.

But now, here she is in all her super-energised glory: Captain Marvel, aka Carol Danvers. At start of the film she is simply Vers, a Kree warrior with a serious case of amnesia, a mysterious strength she is trying to control and part of a crack team of soldiers out to defend the Kree empire.

During a mission under the wing of Yon-Rogg (Jude Law), her mentor, and the rest of the Starforce team, Vers is captured in an ambush from the enemy Scrolls led by the indomitable Talos (Ben Mendelson), and memories of a former life start to emerge. A young girl crashes a go-cart during a race, during training an cadet hangs onto a rope amid the jeers from her fellow air-force hopefuls, two women sing karaoke in a dusty California bar.

After nearly destroying half a spaceship, and crashing to Earth via a Blockbusters, Carol starts to navigate a lost identity, searches for a woman she half-remembers from her former life, and deals with the changing allegiances as she starts to discover her past. Unlike the previous origin films in Marvel’s Phrase One, there is a sense of an already established universe, but directors Amy Boden and Ryan Fleck manage to steer the film away from those cliches, and the use of flashback as a reveal maintains a sense of mystery and interest in Carol’s past.

Brie Larson is a perfect embodiment of Carol – fierce, funny and unashamedly angry, she is willing to help others without ever compromising her femininity. Some of the best scenes take place between the action, as she is reunited with her best friend Maria Rambeau (Lashana Lynch) and her daughter Monica (Akira Akbar) in their Louisiana home. There is a perfect blend of love and tension in their first meetings, as Carol slowly regains the memories of her former life. The bond of female friendship and solidarity in key to the overall message of the film, as Maria tells Carol of the support and love they gave to each other while Carol was still on earth, and the determination of the two to do right by the memory of Dr Wendy Lawson, a scientist and genius who cemented the two women’s’ places in the air force.

We are also treated to a pre-eye loss Nick Fury (Samuel L. Jackson, de-aged thanks to the magic of CGI), a man who very quickly comes to terms with alien women falling from the sky. Jackson and Larson have an excellent chemistry together from the off, gently teasing and annoying each other, as Fury becomes acquainted with a world far from his own but still with all the quips, sarcasm and a love of cats. Special mention goes to Goose, the best supporting actor in the whole film, the ginger cat with some of the greatest reaction shots captured on screen.

Captain Marvel is a war film, and one not afraid to take a look at the horrors and decisions that take place on each side. It manages to be morally grey – but only to an extent – at the end of the day this is a Disney film. It’s not the best of the Marvel films, but is very close to the top of the ranks.

And it there’s one Marvel superhero you’d want to do karaoke with, it would undoubtedly be Carol Danvers.