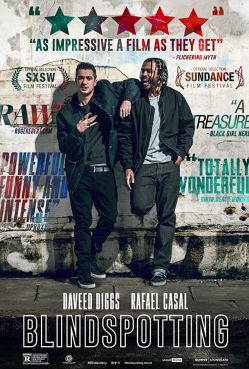 A lyrical ode to the city of Oakland, Blindspotting expertly dissects gentrification, race and police brutality and the issues surrounding two young men finding themselves in a neighbourhood that they no longer understand.

Vibrant, colourful and Shakespearean, under the direction of Carlos López Estrada, the tale of two old friends navigating life in the rapidly gentrifying neighbourhoods they live and work in is remarkably heart-warming and uplifting, despite the systemic issues that refuse to let them move easily through their lives. Colin (Daveed Diggs) has three days left on his probation and is trying to avoid getting into anything that might jeopardise his chance of freedom when he witnesses a policeman shoot and kill a young black man without just cause. Meanwhile his quick-tempered friend Miles (Rafael Casal) is only adding to Collin’s issues, buying a gun and starting fights with hipsters who are invading the neighbourhood.

Collin and Miles’ friendship is at the very heart of the film, from exasperating yet gentle bickering in neon-blue illuminated car over guns and fast-food, to a very real and painful argument about their relationship in the third act of the film as tensions come to a head. Diggs and Casal, who wrote the film, have a collaborative partnership which seeps into the characters they play: the familiarity and exasperation that you have with someone you’ve known since childhood, weaknesses and uncomfortable parts of their personality that you overlook due to loyalty, all add to the centrality of their relationship.

Diggs in particular has a wonderfully open and expressive face that flows from comedic annoyance to heart-breaking fear and panic without ever seeming over-exaggerated – one moment he is simply waiting for the traffic lights on a crossroads to change, the next he is looking into the eyes of a policeman who has just shot an unarmed man in front of him. It is a fear that plays out almost in real time – a pause stretches out as both men, shocked and afraid, are unable to break eye contact.

Meanwhile Miles manages to get Collin into trouble at every turn – shouting angrily at a customer from their moving van, buying a gun and violently turning on guest at a party who questions his own identity as someone born and brought up in the neighbourhood. Miles’ own whiteness gives him distance from the dangers of profiling – he buys a gun and starts brutality fights, but it is Collin who is followed down a darkened street by a police car.

Both Diggs and Casal have background in poetry and music, and have spoken about their use of verse throughout Blindspotting, culminating in a powerful confrontation about race and brutality, that is Shakespearean in its denouncement and commentary on modern American society. This use of verse never feels forced, or unnecessary – it is how Collin is truly able to express his own feelings on the gentrification of Oakland and on his own situation.

That’s not to say that Blindspotting doesn’t have any moment of levity, Miles’ own effervescent nature coming to the fore in a local hair shop, as he stands on a table surrounded by customers in a bid to sell second-hand hair tools in a standoff with the owner, ending in with a forceful declaration of “Fuck Alfred Hitchcock!”.

It would be hard to call Blindspotting heart-warming. It tackles the PTSD left behind by incarceration and police brutality, holding a mirror up to an American that refuses to talk about race and class. It viciously skewers cultural appropriation and the issues brought by gentrification but manages to do with it with a nod an audience that is willing to understand it.

Blindspotting didn’t get nearly enough buzz around its UK release last year – but it more than deserves your time and attention.